The policy was along expected lines in terms of action with the MPC delivering a 50 bps hike, taking the repo rate to 5.90%. The recent dissent on stance continued from MPC member Prof. Varma. However, there was a new development on one dissent on quantum of hike. Dr. Goyal voted for 35 bps hike only.

Before we turn to the important takeaways we must make one observation: if what one looks for is assured navigation in central bankers, then Das is amongst the best we have ever had. Thus there is a clear recognition of our strengths and a sense of confidence in the face of global challenges. However, the resolute normalisation of policy nevertheless continues without taking the eye off the ball.

The clearest example of this, in our view, was in the clarification of stance given by the Governor today. As background, this has been a somewhat vexing issue. Within the MPC itself there is one argument on appropriate stance linked to the level of repo rate achieved and another around absorption of liquidity. The clarification from the Governor in some sense combined the two. When the stance of monetary policy was moved from neutral to accommodative in June 2019 the repo rate was at 5.75%; lower than what it is after the policy decision today. However, inflation was sub 4% on near projections and liquidity was mildly deficit. Today, near projections on inflation are still around 6% and liquidity (when adjusted for very high government balances part of which will be spent going ahead) is still in surplus. Hence both on ‘real’ policy rate in the near term as well as on current liquidity situation monetary policy is deemed to be more accommodative today. This definition, alongside a refusal to get drawn into a debate on terminal policy rates, keeps monetary policy flexibility alive in the face of a very hostile global situation. That said, for a variety of reasons we believe we are probably one policy meeting away from achieving the terminal rate in this cycle. We discuss these below:

As noted above, it is prudent for the central bank to not get drawn into the terminal rate discussion at this stage. Governor Das has commented, including in his speech today, on the difficulty in providing forward guidance in a policy tightening cycle, especially one that is being conducted in such a highly uncertain environment. His observation that forward guidance may in fact end up destabilising financial markets has been proven true even in recent experiences with developed market (DM) central banks. Thus we have seen multiple examples on some of these having to go back within days on guidance provided on quantum of upcoming rate adjustments, with consequent volatility in markets. That said, we expect the repo rate to peak at 6.15 – 6.25% in this cycle with the final hike likely in the upcoming December policy. This is higher than our earlier expectation of 6% and reflects changes to DM rate forecasts by a very sharp extent lately, something that we weren’t expecting earlier (https://idfcmf.com/article/9551 ). This still means that we don’t have to follow the US Fed lockstep, even as some upward adjustment is prudent given the latest aggressive changes in Fed (and other DM central banks’) terminal pricing lately. We summarise below some of our reasons:

There has been a resurgence in global market volatility over the past few weeks, with data and events triggering a substantial repricing of terminal rates in many major DMs. This also translated locally in market repricing RBI rate trajectory significantly higher. For instance, 1 year overnight indexed swap (OIS) yields have risen more than 50 bps since early September. The bond curve has flattened aggressively, partly reflecting the above development. As an example, the yield on 5 year and 10 year bonds virtually converged going into today’s policy. We think this is excessive, and makes the relative value in 3 – 5 years maturity government bonds all the more appealing. With a terminal overnight rate of around 6.25%, there is more than adequate cushion on 3 – 5 year rates and we expect the same to start to get factored into the shape of the curve as market’s peak rate expectations begin stabilising again over the next few months. Also very importantly, the government borrowing calendar for second half of the financial year is quite light on supply in the 5 year segment when compared with longer duration. This is summarised below: 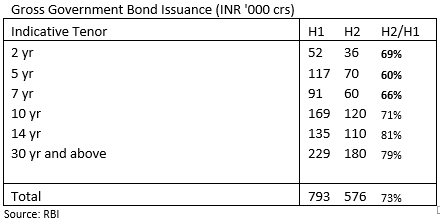 Finally, gross supply of state development loans (SDLs) will likely pick up meaningfully in H2 vs H1. This will alleviate some of the ‘scarcity’ in duration supply that has been plaguing longer term investors like PFs and insurers, and thereby help steepen the curve somewhat as we go ahead. Thus both reflecting the shape of the curve as well as our view on terminal policy rate, we continue to find the most value in 3 – 5 year government bonds. That said, shorter end rates have also repriced significantly thereby making money market products relatively well placed provided the investment horizon here is kept somewhat longer than earlier accounting for the larger volatility generally in markets in the current state of the world.

The Disclosures of opinions/in house views/strategy incorporated herein is provided solely to enhance the transparency about the investment strategy / theme of the Scheme and should not be treated as endorsement of the views / opinions or as an investment advice. This document should not be construed as a research report or a recommendation to buy or sell any security. This document has been prepared on the basis of information, which is already available in publicly accessible media or developed through analysis of IDFC Mutual Fund. The information/ views / opinions provided is for informative purpose only and may have ceased to be current by the time it may reach the recipient, which should be taken into account before interpreting this document. The recipient should note and understand that the information provided above may not contain all the material aspects relevant for making an investment decision and the security may or may not continue to form part of the scheme’s portfolio in future.  Investors are advised to consult their own investment advisor before making any investment decision in light of their risk appetite, investment goals and horizon. The decision of the Investment Manager may not always be profitable; as such decisions are based on the prevailing market conditions and the understanding of the Investment Manager. Actual market movements may vary from the anticipated trends. This information is subject to change without any prior notice. The Company reserves the right to make modifications and alterations to this statement as may be required from time to time. Neither IDFC Mutual Fund / IDFC AMC Trustee Co. Ltd./ IDFC Asset Management Co. Ltd nor IDFC, its Directors or representatives shall be liable for any damages whether direct or indirect, incidental, punitive special or consequential including lost revenue or lost profits that may arise from or in connection with the use of the information.